This article was commissioned by The Upcoming, where it appeared for the first time.
To make humanity visible and capable of moving the heart and the mind is one of theatre’s core missions; in fulfilling it, Marianne Elliott and Miranda Cromwell direct a masterpiece. After a glowing debut at the Young Vic, their Death of a Salesman shines at the Piccadilly Theatre. It’s an intense and personal family drama that digs deep into affections and vulnerability. The performances of each and every member of the cast form the play’s backbone.

Willy Loman (Wendell Pierce) is a salesman. He continuously travels from New York – by car, by train – to earn a decent commission that will pay the bills and support his family. His two sons, Biff (Sopé Dìrísù) and Happy (Natey Jones), are now adults, but with no jobs and no clear prospects for the future. The many years of work are taking their toll on Willy. And in the meantime, an offshoot from the past starts to emerge which seems to fracture the relationship between father and son.

The entangled sequences of misfortunes and memories need time to develop, hence the prolonged running time. While the first act properly sets up all the narrative threads, it is during the second part that the substantial material comes out most vividly.

Past experiences reemerge starkly in the protagonist’s mind. Thanks to some playful lighting and exceptionally fragmented body language, these moments also flow into our main character’s current reality. Descending props further ease this overall feeling of smooth interchanges between real and recollected worlds. 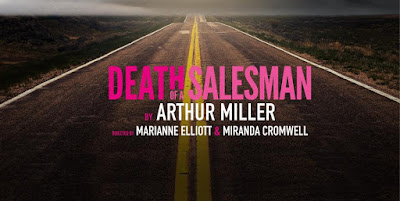 At the centre of this production, there is Pierce, who is fervent and absolutely stunning on stage. His portrait of Willy is fragile and powerful at the same time. He represents a man tired and distressed, justifying his whole situation as an illness, the result of his foolish sons and many years spent on the road. Reflected in him, though, are the faces and spirits of the deluded, tense and tragically disillusioned.

Dìrísù’s pathos increasingly becomes utterly compelling. And the singing choruses, which concentrate at the beginning and at the end, beautifully relieve the tale.

The play leaves us with several points to take home and ponder further, especially on the topic of regret, family support and the meaning of help in a state of mental disorder. The acting exudes passion and an impelling desire to tell the story, with neither pity nor preaching, but just the bare exposition of a confident man and the spiral of degeneration triggered by his actions.


- Read the article on The Upcoming -