Translations: a tale of clashing cultures

Words convey more than names or labels for things and actions. Language is a cultural code that encapsulates the story and behaviours of a community. Brian Friel’s Translations tries to give bodies and narrative structure to this concept, still too often taken for granted today.

During the 1824 Ordnance Survey, the British government attempted to map the whole territory of Ireland and convert, once and for all, on paper and approved by law, the enigmatic Gaelic denominations into Englishmen. At the hedge school of Master Hugh (Ciarán Hinds), the military operation is received with some friction; even more so elsewhere, where the linguistic project, together with a reformation of the education system, is considered a further act of British colonial domination. Owen (Fra Fee) collaborates with the cartographer Lieutenant Yolland (Jack Bardoe) as a translator for communications with the local tribes. But there is more than geography to deal with.
The script highlights how control is exercised via standardisation and how connected power and verbal expression are. Rough as they could appear, the Irish protagonists study Latin and Greek, a practice more widespread and common than learning modern English from their not-so-amiable neighbours. The linguistic barrier becomes an obstacle for lovers across borders and a sign of supremacy for the authorities.

In his middle man role, Fra Fee injects humour and delightful enthusiasm. As much as sounds and pronunciation, an important role is played by silence, sign language, and the inability to speak, all personified in Sarah by a delicate Liadán Dunlea. Dermot Crowley and Ciarán Hinds are the sturdy supporting columns of this production: their characters represent heritage and roots, and they perform respectively a totally amusing companion and a poised tutor. 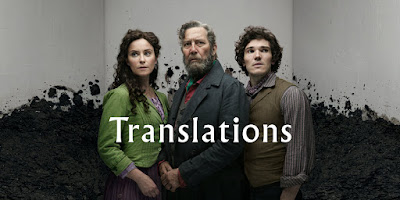 Even given the considerable efforts of the talents involved, this remains largely a drama of inaction, with active sequences only starting to build towards the end of the first act. The second part is definitely more substantial, having left the rather prolonged introduction to the story – with its village gossip and the daily affairs of farming – behind. The setting is left simple, with a natural uncultivated background and lights that mimic the changing of the weather.

It is telling to see again on stage – after its first sold-out run last year – such a compelling tale of clashing cultures and the importance of the people’s language at this moment in history. Translations is a splendid show that brings the theatregoer’s attention to our words and the humanity they contain.