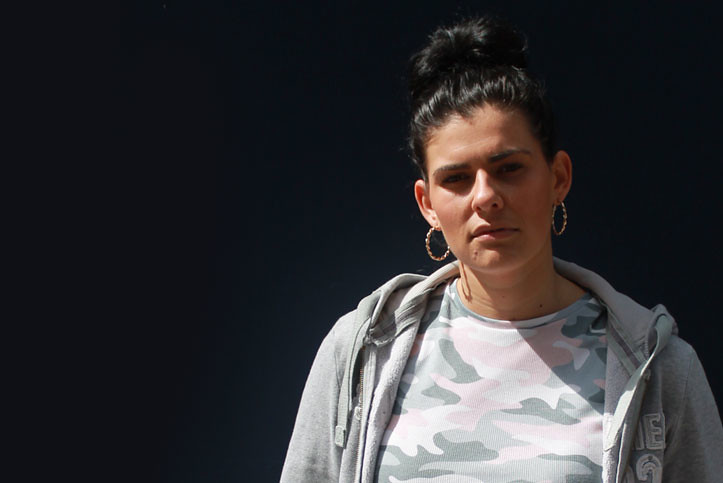 There are many elements of her late-teen life that scare and excite Heledd at the same time. The turning point comes with her mother’s diagnosis of dementia. The degenerative disease casts a coercive shadow of doom and bitterness over both the present and near future of the girl, whose family, at the moment of the medical verdict, seems to have been forgotten by the public services and the government. That is until a sort of vague new beginning arrives in the form of a charity and Heledd’s life-changing accident.

The stage is simply scattered with photographs, upside down on the floor or hanging against the wall, representing memories lost and put on display. The script doesn’t reveal anything excessively disruptive. It flows – mostly thanks to a well-sustained rhythm – but there are times where it feels a bit like a teenager’s vent in the body of a fully grown adult. However, the show is a sturdy single act of rage that reflects the mood of its protagonist. With a spectrum of scenes featuring everything from swearing to energetic singing moments, the role of Heledd is on its way towards a deep and fully-rounded maturity. It may appear even slightly too grown up at the starting point, but then gradually all the pieces of her sensitive personality become clear as the motivations and pre-diagnosis decisions are confessed. There are also few tender moments, particularly in the care home, that are really worth waiting for.

The play is neither completely rose-tinted nor sorrowful: its strength lies in the balanced variety of scenes, flashbacks and projections, featuring invisible characters who have distinctive voices in this chapter of the girl’s story. Hannah Dando is the absolute protagonist of the stage, and not just in the literal sense – she plays all the parts on her own, occasionally wearing different hats to have the unseen speakers interacting – but also because of the way she superbly holds the show. Now shedding a tear, now cunningly winking at her mother, she is thunderous. The Heledd Dando gives life to jumps from the page to resonate in the hearts and feelings of the audience.