Starry Messenger: wonders in the midst of banality

With his melancholically funny style, Kenneth Lonergan presents the story of tedious astronomer Mark as the man’s life is shaken unexpectedly and slowly by the unclear design of the stars. In the monotonous existence of the Starry Messenger’s protagonist, we witness many passers-by defeated whilst waiting for a twist towards the better.

Trying to make ends meet while tending his childhood passion, Mark (Matthew Broderick), married to Anne (Elizabeth McGovern), teaches extra hours on evening courses at the New York Planetarium. The building, soon to be closed, has been the place where many, including the protagonist, discovered their love for the infinite skies. At the end of one of his classes, he meets Angela (Rosalind Eleazar), a young single mother, a catholic nurse-in-training who seems to wake Mark from the slumber he has fallen into.

Galileo’s titular treatise Sidereus Nuncius put into writing astronomical evidence obtained through actual vision, debunking unfounded theories. Drawing a fine line, the playwright exposes in this piece of theatre how dreams and desires, leaps of imagination, can unexpectedly be opened in the midst of banality. Mark doesn’t believe in anything, and it is in this atheistic and passive position that wonders happen. 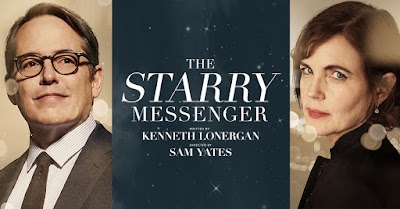 The first part of the play, which aims to render the dull routine and ineptitude of the main character to its extreme, drags extremely slowly, unveiling a certain weakness. The efforts of Broderick to portray the insecure Mark are remarkable, but they don’t always coordinate with the rest of the cast. For some members, the characters simply appear too big for them to be efficiently delivered with the right balance of energy.

During the second part, the rhythm partially increases. More humorous lines and situations keep up the pace, and the people around the protagonists take more of the stage. The ones catching most of the attention are Jenny Galloway as the torrential Mrs Psyner, Jim Norton as the droll Norman and Sid Sagar as the very self-conscious Ian.

The dynamism and details of the set design by Chiara Stevenson are extraordinary. The rotating scenography, with a clear distinction between familiar surroundings and the classroom, is an appropriate match to the ever-changing and open spaces of the astronomical theme. The loud violin segments are less fitting, although all the rest of the music finds its place pretty well.