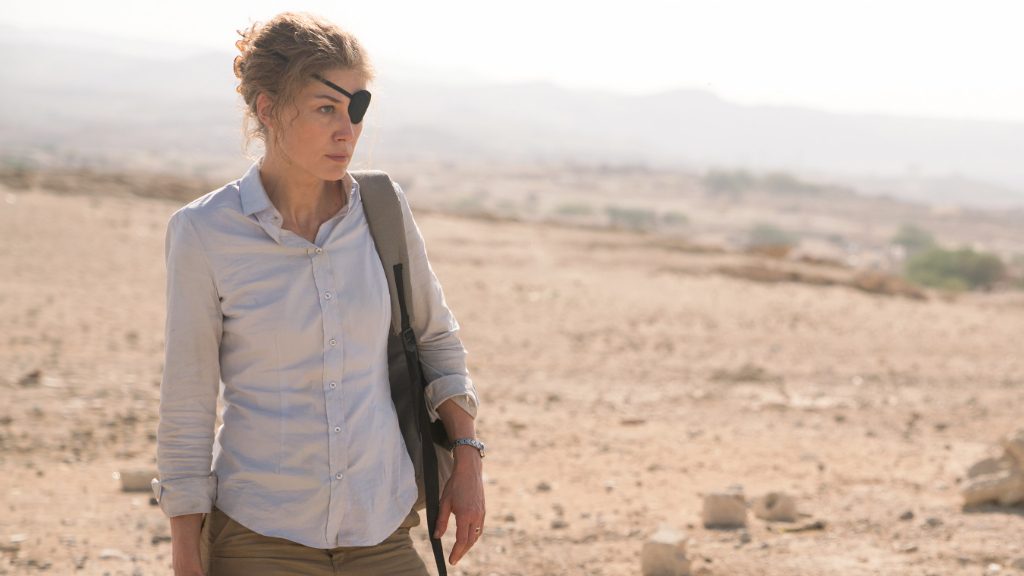 It seems like a blessing after a screening of A Private War to be able to walk out and freely breathe fresh air. Thousands of civilians, aid workers and members of the military forces cannot escape so easily from the horrors vividly represented in Matthew Heineman’s movie. This intense portrait of Marie Colvin is conveyed through exceptional visuals, standout performances and is guided towards a touching finale with an original song by Annie Lennox.

Colvin (Rosamund Pike) is a renowned American war correspondent for The Sunday Times. In 2001, she flew to Sri Lanka to cover an untold civil war, as a result of which she lost her left eye. The black bandage used as an eyepatch becomes a symbol of the extreme courage and intrepid stubbornness of its wearer. At the same time, however, internal demons from the death and violence witnessed arise in the journalist, forcing her to reflect more and more on her work, and inciting deeper discussions with the editor (Tom Hollander) as well as a closer friendship with photographer Paul Conroy (Jamie Dornan). Back to the frontline, Marie moves from London to Afghanistan, then onto Libya and finally Syria, where she is among the very few foreign press members denouncing what continues today to be one of the bloodiest civil wars of all time. 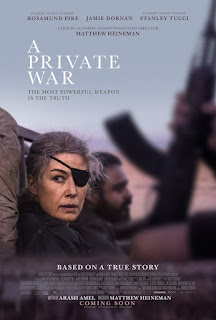 The angle adopted to tell the tale of Colvin’s last years follows and mimics the same approach that made the reporter an incredible storyteller: the human interest story. “People connect with people” and “I want to tell your story” sound like statements coming right from the journalist’s manual, and they find correspondence in the poignant close-ups of children’s eyes and the faces of grieving women.

Avoiding the sadly routine coverage of conflicts, the photography by Robert Richardson works instead on the details and medium shots. There are, of course, some gruesome scenes, but they grow with the narrative, building to a climax and becoming a truly compassionate element in Marie’s story.

The change in the surrounding panorama, from the sparkle of the city to the rubble of the warzones, is effective. The clashing closeness of such different lives makes for a subtle moral reproach relatable to all. More forthright is the intent behind the protagonist’s narration, which could have been better integrated into the dialogue.

Some extra time would have been beneficial in further acknowledging the role of post-traumatic stress disorder and the subsequent recovery of the reporter. Though the condition – which has only relatively recently been openly recognised – is clearly labelled and addressed in the movie, it would have been a more effective conclusion had the feature further followed the healing process and the interactions between characters around this central topic.

Pike is fiercely stunning. She plays the tough Colvin – complete with all her tics and perpetually puffing on a cigarette – with decision and the needed emotive charge. Dornan, in the role of friend and colleague Conroy, also stands out for his performance. Together, they compellingly embody a fierce passion for the job and the strong relationships that are forged in difficult times.

A Private War is released nationwide on 15th February 2019.