This article was commissioned by Disclaimer Magazine, where it appeared for the first time

The high roof of the Union Chapel makes the chanting of the Arsenal supporters resound exactly like the singing of Sunday worshippers. The faith with which the two different audiences approach their weekend appointments looks more or less the same.

In this Chapel, Fever Pitch – The Opera by the Highbury Opera Theatre, based on its namesake, the autobiographical book by Nick Hornby, premiered last week.

A curious feature was the form chosen for this adaptation.
Would an opera be the best medium for a football-centred story? 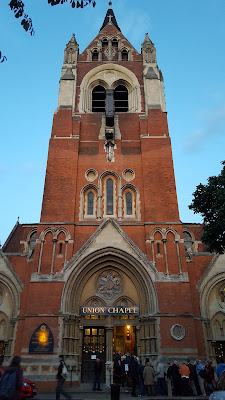 Looking at other stage adaptations in London there are a couple of other examples where the source material is far from a theatre script; Obsession at the Barbican Theatre (2017) and American Idiot are just two that stand out.

The former, Obsession, did not receive great applause from the critics, despite Jude Law in the starring role of the seductive Gino. The reason may fall on some odd artistic decisions. From the bare scenography to the back-to-front screens on the protagonists’ run.

Although perfectly in line with the minimalist vision of director Ivo van Hove, they didn’t match with the style of neorealist Italian movie Ossessione by Luchino Visconti, so rich in the details of the peninsula’s panorama and realistic in its rural setting, on which the play was based.
In addition to this, the dialogue was stripped of the depth and questioning narrative the story originally involved.

The second example, American Idiot, was the stage adaption of the rock album by Green Day. Due to its work of reference, it could never have been anything other than a musical. The challenge, in this case, was to avoid the risk of reproducing a sequence of music videos, thereby creating a fractured, and difficult to follow, story.

Instead, the result is a flowing narrative, with all the dark grunge of the original tunes, plus the enthusiasm of a live performance. And the continuous productions and tours are the proof of its success.

The choice of composing a libretto for Fever Pitch the Opera to stage a book, and in particular, a football-centred story, sounds initially quite peculiar.
But how does one choose the best form in which to translate another artistic expression?

As a community ensemble, HOT realises that a choir is one of the best mechanisms to bond together different voices, even harmonise them so to create a unique experience. The specific choice of the Opera, although unusual, delivers the need to distance from the preconception of a football story and reconnect instead with the wider perspective given by Hornby’s book. 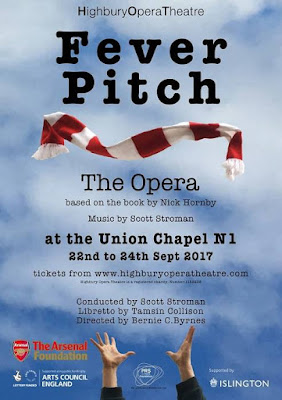 The end result is a transformed experience. Adaptations aim to give different messages, to communicate nuances and alternative interpretations.

If arts speak a universal language, changing some of the terms or its font will not fail to deliver still strong stories. Indeed, the process will open the mind to unexplored pitches. All that is needed is the right channel.

As American Idiot gives a different view from the personal feelings music may raise (opening up the lives of Johnny and co.) and Obsession reflected a modern artistic interpretation of the film, so Fever Pitch the Opera expresses the shared values and community engagement shown in Hornby’s story.

Success can be decided by the audience’s willingness or not to connect with this new version, not simply by well-known actors involved or because of the historical significance of the referenced work, although these may help.

After examining these adaptations, and many more across the country, music often seems a good bet.

The choice of the venue is symbolic. Firstly, as mentioned, the comparison of worship cannot be avoided. The stunning architecture and the wooden benches inspire a sense of reverence stronger than other opera chambers. Secondly, because of its proximity to the Highbury Stadium, which was the “Home of Football” for Arsenal Football Club.

The story itself has its heart focused on the Arsenal team, or, rather, on the team's influence on the life of its supporters and fans.