Pink petals delicately fall from the ceiling on a little garden where two hands shaped chairs are gathered around a stone table. White and light grey are dominant on the plain walls and birds are tweeting in the background.

The stage at the Vaudeville Theatre, where The Mentor will be on for this summer, seems to be ready for an idyllic story of poetry and love, all set for a narrative typical of romantic literature. Until Benjamin Rubin (F Murray Abraham) enters the scene, with strict commands and clear instructions to the hesitant fund administrator (Jonathan Cullen) of the arts foundation organizing the mentoring programme.

Mr Rubin, author of a masterpiece included in the schools’ curricula, is living on the fame of the past times. That work, still praised, was indeed his only successful piece, despite few other writing attempts. Now, for one week, he will mentor the young talent Martin Wegner (Daniel Weyman), positively described by the critics as “the voice of his generation” and currently on the making of a second script.

If you believe enough in your dreams, you can make them real. This is a good tagline we shall repeat ourselves when life becomes tough, when the comments are harsh, or the opinion of the people we love turns to be less encouraging than we thought.

However, to keep the ears open to possible constructive suggestions is still advisible, for as big these desires can be. The risk is that the dream career of becoming a playwright looks like irremediably moving away under the quick blows of a red pen.

Belief and personality are the pillars of this light comedy by Daniel Kehlmann.
On one side, there is a young ego, with big aspirations and blinding stubbornness from family’s and first reviews’ positive comments. On the other hand, a solid ego, built on the old fame and the contempt for the world that let him down. The two crashes on the stage, with a revealing act as a result. 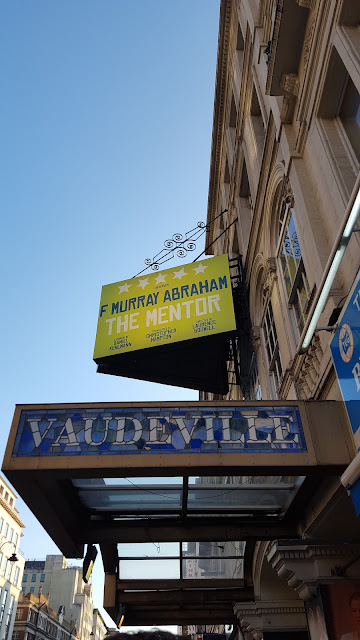 The set seems to be left quite clear for the majority of the time - with often just two people on the stage - to leave the words shouted or whispered to echo in the space.

Philosophy pills are dispensed here and there, rolling in an almost surreal scenery where birds and toads make the uninterrupted background sound, and past memories reemerge.

With humour, Kehlmann reflects on the excessive self-esteem often seen behind and in front of the scenes in the arts world.

The same strong personality that induce Benjamin Rubin to seduce Martin’s wife, Gina (Naomi Frederick), despite the age difference. The same fortified pride that, besieged by externals, leads Wegner to doubt of every opinions from akin and critics, until throwing his Mac in the pond.

What the charm of good words cannot do, audacity will supply. What talent misses to compel, pride and a bit of arrogance help to obtain and to earn respect from the others.

The story unfolds smoothly. The script is clear without unseen twists, and Laurence Boswell directs a brilliant cast.

An animated Weyman make a perfect counterpart to the inflexible Abraham. And the clumsiness of Jonathan Cullen is perfect in the between of the two fires. Pity that Naomi Frederick’s movements look quite stiff.

The short running time perfectly encapsulates the wits and the turns of the story, without dragging the arguments too long.

The comedy is a funny window on the amour propre of artists - and not artistic people alike. The winning element is the balance of "wisdom" from the old playwright, love affair, and the humorous scenes of truth.