- This article has been commissioned by Disclaimer Magazine, where it appeared for the first time -

At the theatre’s exit, I usually have one dominant thought, one line that stays with me, one actor’s face impressed in my mind. But it is hard to say what might be the one - and only one - this time as I walked out the Shakespeare's Globe after Tristan and Yseult by Kneehigh.

It wasn’t one, but numerous thoughts. This is an impressive revival of the myth of Tristan and Yseult, if the term “revival” can include a production completely stripped of any medieval connotations. The performance comprises acting, singing, dancing, 360 degrees engaging theatre that speaks about human feelings to a 21st century audience through a 12th century legend.

“[This production] reminds me to believe anything is possible and to never inhibit my own creative process, or allow others to inhibit me,” Emma Rice wrote in the introduction to the play. And in the mixture of genres, in the energy of the characters, in the colourful set, the audience easily understands how creativity truly transforms and revives an ancient story.

Emma Rice’s bold artistic decisions sparked not few criticisms from the Globe’s board. Together with her innovative use of lighting technology, her choices determined the shortened position as artistic director at the Shakespeare’s Globe. With this final summer season, though, all dedicated to love, Rice leaves an unforgettable signature. 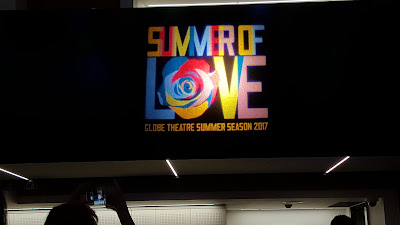 She takes to the London scene one of her early production, Tristan and Yseult by Kneehigh, which dates to more than a decade ago. Adapting and directing the text by Carl Grose and Anna Maria Murphy, in 2003 Emma Rice brought to the stage a masterpiece which will have an impact in the programmes and tours of the Cornish theatre company.

After 2014 and 2015 shows in the US and a good number of UK performances, this year Kneehigh brings their Tristan and Yseult on a Celtic tour: Brighton, London, and then Theatr Clwyd, Bristol Old Vic, and Galway International Arts Festival.

The company started from the improvisation and pure passion for theatre. In 1980, a village school teacher began a series of workshops in Cornwall. From that bunch of local musicians, students, and farmers, a community slowly was built. The productions also came about from a mixture of legends, history, and anarchic spirit.

And here it still presents itself today, with sparkling tones, performing innovation, and inspirational texts.

Starting as a nomadic company, Kneehigh preserves their peregrine soul. With over 30 years of works, they continuously tour around the country. Launched in 2010, Asylum constitutes a flexible nomadic structure, and the company’s only home and base when they get back to Cornwall.

Popular tales, ancient legends, folklore is at the core of Kneehigh. But the theatre charity goes beyond staging performances. Since the opening of Asylum, other projects – called “Rambles” - have kicked off as well, aiming to make connections and build communities from and around culture. Workshops, local festivals, and even a poetry walking app: every programme is a testimony of the great achievements possible by creatively engage with others.

Story of loved and unloved

Romeo and Juliet remains probably the most famous English classic of unfortunate love. But the story of Tristan and Yseult precedes the Bard’s tragedy.

The motive of forbidden love can be traced back to mid twelfth century, at the very beginning of the legends of the Matter of Britain. Béroul wrote the related French romance, reorganizing the plot and the characters from the Celtic legends and folks’ narrative.

Cornish King Mark (Mike Shepherd) defeats the long fought Irish king. In revenge to the crimes committed on his land and to his people, he pledges to take the enemy’s sister, Yseult (Hannah Vassallo), as his spouse. The King sends the French knight Tristan (Dominic Marsh), just arrived at the court, to search and bring back the princess. But once reached the Irish coast, the valorous knight falls in love with the Yseult.

Despite the arranged marriage, despite the knowledge of the murdered brother, despite the fond relations both have with the king, the two lovers are consumed with passion for each other.

The narrative is powerful, with poetry and prose equally used. Instead of digging into the historic features, the choice made for this production is to unearth a hidden theme: the unloved, those who are not seen by blind passion, the characters left out by a cruel selection.

The real protagonists are the love spotters. Through mime, dances, and rather ridiculous headgears, they impersonate a sort of Greek chorus. They are the consciences, a bit of deus ex-machina, but also the everything Tristan and Yseult - those who have enjoyed such a passionate love that would have saved thousands of souls - would not be: they are unloved.

There are no castles, no dragons, no heavy armours, but rather neon lights, sunglasses, and circus liftings, choreographed dances (with hints of dabs) and classical music notes. What appears on the stage can look like a chaotic mixture, bringing the audience at times to the realm of the absurd.

However, behind the humorous eccentricity, the public feels the truly human heritage of the story.

The King of Ireland jokes on the different EU status between his land and Cornwall. Irish and French speakers are magically translated on stage. The audience standing in the yard participate to the wedding celebrations. The actors change on the stage and break the fourth wall.

In a time when it’s difficult to imagine a united humanity, this ancient story shows how entwined people are. The legend has its origin in Cornwall, and the related romances are French, but love and despair are universal feelings. And the Kneehigh brilliantly succeeds in making theatre a powerful medium for truly human stories, painted in Cornish traditions.

Thanks to Disclaimer Magazine for the invite.