‘A place to perform, a bit of cash and a bit of advice’: that is what a theatre company needs for that first step of the career ladder, according to Oliver Lansley and James Seager, Artistic Director and Producer respectively of Les Enfants Terribles.

And this is exactly the prize for the winner of the newly lunched Stepladder Awards promoted by LET, in collaboration with house and in association with Wilton’s Music Hall.

Creativity and enthusiasm are key for a theatre company to start, but unfortunately not enough to progress in the arts world. What is necessary, in fact, is the support, from the audience as well as from mentors and sponsors. And that is even more true when at the beginning.

After a long-desired premiere of their original work, fringe theatre companies often cannot progress in bringing the piece on tour, usually for lack of funding.

The same happened when the cast and creatives behind the immersive Alice’s Adventures Underground and award-winning The Trench started. Understanding the financial difficulty, and valuing the development of creative minds, Les Enfants Terribles is now offering the opportunity for a company coming from the Edinburgh Fringe Festival to climb that ladder and tour their original writing.

The Stepladder Awards follows the LET Award, first launched in 2012, which focuses more on the initial steps of a theatre company. Rendered Retina Theatre Company, winner of the 2017 edition, will be awarded indeed a performance slot with The Pleasance at the Edinburgh Fringe Festival.

The applications for the Stepladder Award are now open. But the news is not yet finished. Les Enfants Terribles is also returning to The Vaults with Alice’s Adventures Underground for a new and interactive London season, with shows running from April to September.

We have then asked Oliver Lansley, LET Artistic Director, more about their first years as a theatre company, this new exciting opportunity for original performance 'in search of tour', and their return to the Underground City with their Underground show of Lewis Carroll novel.

- What has been, in your experience, the major difficulty you faced when LET started?
The major difficulty when I started LET is probably the same major difficulty we face right now - money! Finding money to produce theatre is difficult, particularly when you're trying to take risks and produce something new.
This has meant a lot of touch-and-go moments over the years if such risks haven't paid off, but fortunately most of them have and we're still here today. If you're not able to take risks, you'll never be able to make anything truly innovative.

- What is the most memorable moment of the very first years as theatre company?
There are so many! I remember our first sold out show - it was one of the performances of The Terrible Infants. I spent the whole pre-set on stage in a suitcase and I remember hearing the ushers telling the audience to move down because the show was sold out. I just wanted to jump out of the box!

We have toured our shows to places all over the world, which has led to some very memorable moments – including performing to Polish school children in a disused swimming pool and our van breaking down in Sweden to name a few!

- For the Stepladder Award, what are some of the elements by which you will judge the entries and what are you looking for in the companies who apply? Are you looking at innovative storytelling or unique plots?
We are, but really we're looking for artists who need support the most as well as having the ambition and potential to bring their stories to a wider audience. Creating and selling original work is really difficult and you're not always rewarded or supported for it, so companies are really brave in even attempting it!

We wanted to create an opportunity specifically for companies who are producing new work that is resonating with an audience, and help them to take that next step forward. 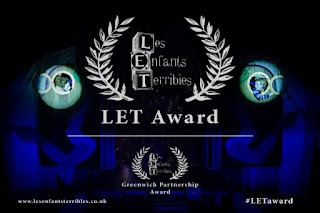 - The LET Award aims to bring the winning production to Edinburgh, whereas the Stepladder Award looks at the wider tour process. Where do these two moments fit in with the life of a new theatre company?
The LET Award is for the start of a company's life - to get that very first show off the ground and up in front of an audience.

The Stepladder Award is a few years down the line. After having created a few shows as a company and found your feet and voice, you need to be ready to take things to the next level, in order to become a full time touring theatre company.

Both awards are something which we really wish we’d had when we were starting out with Les Enfants Terribles so we’re thrilled to be able to help other companies.

- What do you like the most of your collaborators, house and Wilton’s Music Hall?
house are amazing. They have helped us with several touring projects by being open, supportive and welcoming of original work. They are really keen to champion new work and talent and present it to a touring audience - that really is to be lauded.

Wilton's Music Hall is somewhere we have loved for years and we are thrilled that we will be performing there later this year. It's such a beautiful, grand space which fits with our aesthetic perfectly. We were thrilled when they agreed to come on board with the award as it will provide such an amazing London showcase.

- How do you think theatre can help people in this quite interesting political/global moment?
I think it is times like this when art is at its most important. It can be a form of protest, education or expression. Theatre teaches empathy and it can voice the things that others sometimes have trouble articulating. It can hold a mirror up to the absurdity of the world around us and crucially, it can also be an escape. I think many of us feel we might need all of these at the moment.
- You are coming back to The Vaults, with Alice’s Adventures Underground. What are you mostly looking forward to about returning?
We've rebuilt the show entirely from top to bottom which is really exciting. From staging Alice’s Adventure’s Underground the first time round (and from our projects which we’ve done in-between!), we now have so much more experience which allows us to be much more ambitious. The logistics of the show are mind-boggling; I think we can safely say that no-one has ever attempted an immersive show quite like this one before!

- If you could choose independently of budget, programme, or else, where in the world would you really like to go on tour?
Hmm... We are very lucky, as we've been to so many cool places with our shows. We have never done anything in New York so that's high on our list! But I also performing in India would be extraordinary – perhaps stressful, but extraordinary.