Web of relationships and struggles

Courage and love are the most important human values to survive in this world. They define both our self-perception and the relationship with the others.

“There’s no logical reason for doing something so evil” George Tesman (Kyle Soller) exclaims at his wife, Hedda (Ruth Wilson), when he discovers the woman has destroyed the manuscript – a masterpiece – by his academic rival. Who was, by the way, one of Hedda’s suitors in her younger age.

What if the reason is boredom, a strong will to shake the current events, and the lack of meaning and goals everyone else seems to have in life - everyone else, except for Hedda? Or probably is a lack of care for the others and lack of courage for life changing decisions the core motive?

How does the woman reply to her husband? She covers the act as a gesture of love towards her caring spouse.
A lie. Another lie.
Hedda, daughter of the general Gabler, is a beautiful woman, who has decided to settle, to reorder the chaos in her life by marrying an academic running for the title of Professor and tenderly caring for her. But this ‘good intention’ has not led to the happy and posh life she dreamt of. Indeed, boredom, lies, and unhappiness have filled the woman’s existence as probably never before.

Brack (Rafe Spall), judge, friend and frequent guest of the Tesman, is one of Hedda’s many suitors, and now a pleasant confirm for the unhappy wife.

Coming back from their honeymoon, starting to settle in the new house, the couple discovers Lovborg (Chukwudi Iwuji) has come to town. Recovered from alcoholism, he has written a masterpiece in the same academic field as George, with the help of Mrs Elvsted (Sinéad Matthews)

Lovbord represents the chance for Hedda to shake the current state. Not with a return of that younger love they felt, but by attempting to end beautifully his life.

The world premiere for Hedda Gabler took place in January 1891 in Munich. Now, more than a century later, Ivo van Hove brings to the stage Ibsen’s work like a contemporary drama. From the dialogues, to the fresh puns, the show sounds anything but old.

The mental and relational struggles projected in the play are timeless: the variables can be the current news, different customs, changing in the technology, but in the end, a woman can still feel in the same web of unhappiness as Hedda.

The set is spacious, empty, because all Tesman’s money were spent for the house, very bright, and nothing is left at the moment for the furniture, apart from a sofa and Hedda’s piano at the centre of the stage. 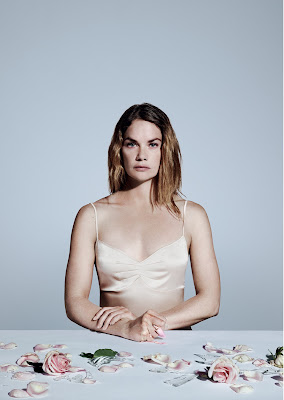 One of the most remarkable elements in this production is the movement. The space is huge, and it feels quite a challenge to fill it, especially when there are only two actors on the stage – which happens quite often. Despite this, the cast really occupy every scene. And in each movement there is a vibrant expression of the character.

The play is tense, particularly in the second part, as the crescendo of the plot and the entangling of the relationships become more and more clear.

Ruth Wilson is terrific. This role is probably one of the most complicate I have seen so far on the stage. Until the end, this woman wants to be alive, Hedda really wants to escape the prison herself has built around. But it seems everything she touches “is cursed”, as she acknowledges.

The beginning of the show is immediate. We enter the theatre and Hedda is already playing the piano at the centre of the stage. The notes are so slow and her head so calm that a doubt rises whether we are disturbing such a peaceful moment.

Then, the lights over us suddenly are turned off, and the stage is bright, like a swift click on the switches, and all the audience fell silence.

Hedda becomes a doll: the more beautiful – as praised by the male characters – when inactive. And despite all the energy showed in her little dancing and excited walking, in the end Hedda is destined to embody a sad doll in the hands of so many – shame and despised by.

To this regard, particularly striking is one of the final scene, with Brack staining the delicate robe the woman has worn for the whole play. Like anger and Hedda’s avid desire to destroy what is pretty around, red splashes cover the beautiful doll. The stomach, the cheeks, the hair: everything is tainted.

During the first part, the stage received rather warm lights, changing with the cycle of the sun going up and down.

In the second part, there is a bright beam from the right side (looking at the stage), exactly in the moment the vicious plan of Hedda is coming to light.

This is a sequence of bad actions to the eye of everyone else, except for the woman who is pleased to know about the suicide / death of a person, which only could demonstrate her that “such a courage is still possible in this world”.

Finally, interesting is the constant presence of Berte (Éva Magyar) the maid on the left side of the stage.
Whether there is an intimate scene going on or an argument, she is always there, discreet and very limited in her interactions with the others, but continuously sitting on that side. Is she the still consciousness of Hedda? Or a silent eye judging from a distance?

Hallelujah by Leonard Cohen plays from behind the walls of the set, but the drama ends in a quite painful note. Tense and passionate, this unmissable play is a five-star production of a great psychological and sentimental story.