When Nobody Returns: nostos and fear of the homecoming

An epic poem from the past…

Myth and epic stories are defined as such because they can be told in years to come and still communicate with the current time. Nostos (homesickness), but also anger, and the battle with ghosts hunting the warriors, are some of the narrative elements we can find in When Nobody Returns by Brian Woolland, at the Theatre Bay until the 6th of November.

The previous production of Woolland, This Flesh in Mind, brought to the stage The Iliad. This companion piece follow the aftermath of the destruction of Troy, or, better to say, the destiny of one of the heroes of Troy – The Odyssey.

Ten years has passed since the ploy of the Troy Horse, and the troops had arranged they return.

But Odysseus (Andrew French) has not come back yet to his Ithaca, now occupied by the Proci, who are waiting for Penelope (Iman Aoun), loyal and steadfast wife, to make a choice among them and crown the new Lord of the island.

Telémakhos (Tariq Jordan), the brave son now 20 years old – the same age Odysseus left for the war – is becoming impatient as well. On one side, he is struggling for air, living in a land which should be his home, but invaded by unwelcomed guests. On the other, Telémakhos admits to be weary of her mother waiting for “this cloud of nothing” - as he calls Odysseus - , vanished after the fall of Troy. 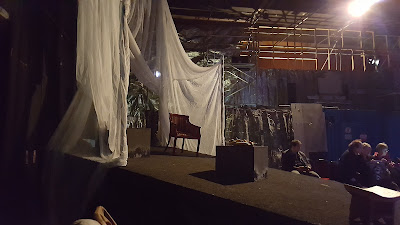 Now, a technical note.
If you have never been to the Theatre Bay at Acklam Village, you would lose such a particular place to set a stage.

Similar to a warehouse, the theatre space is played on multiple levels: the floor, the stage/s - that means two inclined plans set diametrically across the room -, and an upper level – above the audience’s heads.

At this point of the story, we have the actors finding their 'angles' throughout the theatre.

We are transported on Ogygia, where Odysseus is living since seven years with the beautiful nymph Calypso (Bayan Shbib). And then we are moved to Sparta, where Telémakhos visits Menelaus (David Broughton-Davies) – husband of Helen, trigger of the War of Troy – to ask for any news about his father. And then back again to Ithaca, where Penelope is gradually deprived of her freedom and continuously annoyed by Antinous (Gerrard McArthur)

In the end, everything goes back to where the story started, in Ithaca.

…to the present days

A myth, as mentioned before, can talk to us still today. “That was what Paris was: a terrorist” or “We want for a time we can call this land our own” purposely resonate with the current conflicts and stories we hear from the Middle East, that same torn part of the world.

I particularly enjoyed the script as thought to be a current revision of the myth, but without too much stressing the grief and deaths, or intended just to move to tears the audience.

It rather arrived to me as a reflection and analysis on the arguments and the internal battles of the real people living those situations. That’s the message our days can get from this ancient epic poem.

Odysseus, often painted as the charming traveler and the hero survivor of thousand adventures, is instead represented as the victim of internal battles.

“It’s better he died for good cause than to learn the Truth”, he says as he tells Calypso about his nightmares and memories of the bloody battles under the Troy’s walls. Never ask questions: this was the rule, and they obeyed, at the cost of suffering and loss of many companions on the ground.

It’s an enjoyable play, thanks to the excellent performance of the actors, a cast formed by the British theatre company Border Crossings plus the Palestinian ASHTAR Theatre.

The weak points I experienced where some music/sound choices. Penelope introduces us to Ithaca singing together with her maid, weaving the famous shroud. But for every scene change, we heard a sort of rumble, felt rather out of place.

For all those who have studied the Homeric poems, as well as for those new to the Greek classics, the play explains itself why “homecomings are never easy.”