Celebrate Domestic Workers, opposite the Parliament 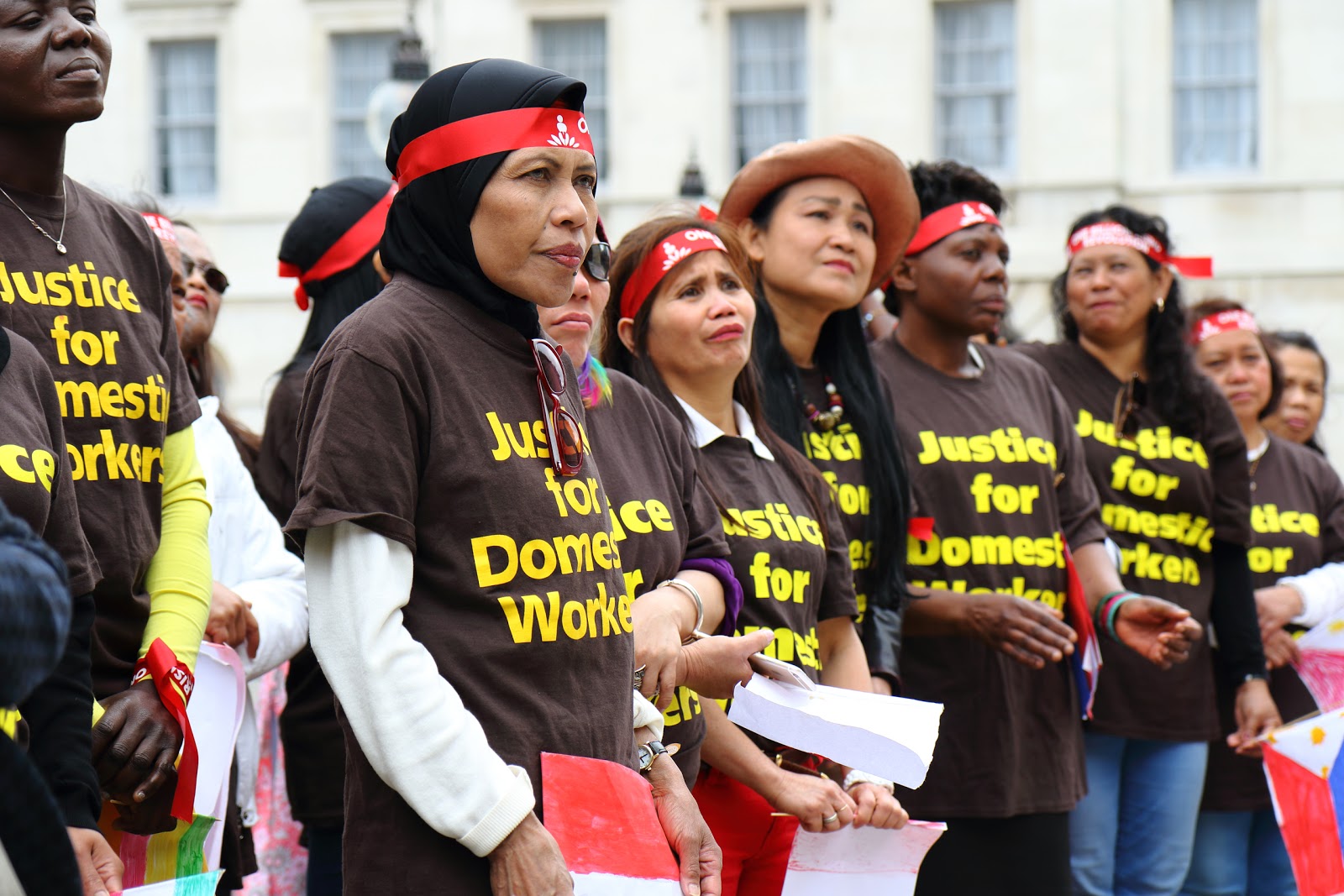 It is a sunny day outside the Parliament, in Old Place Yard. A group of women, all dressed with a common brown shirt and, for the rest, colourful garments, is sharing a picnic style meal, with salad, chicken, and there is also plenty of cake.

Just half an hour earlier, Noani Mukromin, one from the group, read a poem. The lines talk about her children, the grief of having left them in Indonesia, while here she is temporarily employed as an Overseas Domestic Worker.

That means long hours spent within the same four walls - all these of the week, except for Sunday -, little time to explore the city of London, little space for connect with the family at home. But at the end of the month, she can send some money, and they can so escape poverty, given more chances to live a better life. 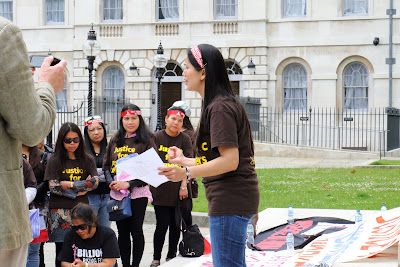 The story goes more or less in the same way for many women in the UK, registered as Overseas Domestic Workers.

16,756 were the successful applications for the related visa in 2014, according to the latest statistics by the Home Office.
Not really a different figure compared to 2008, when they were 16,659

And for the years in the between, there has been quite a regular flow, despite the change in the regulations and the rights of this work category.

16 June 2011 marked the adoption of the Domestic Workers Convention, 2011 (No. 189) by the International Labour Organization (ILO). For the first time, an international treaty lays basic rights and principles of domestic workers, who contribute significantly to the global economy, but also continue “to be undervalued and invisible” – as the preamble to the Convention reads.

Interestingly, this introduction to the document, also highlights the fact that domestic work “is mainly carried out by women and girls, many of whom are migrants or members of disadvantaged communities and who are particularly vulnerable to discrimination in respect of conditions of employment and of work, and to other abuses of human rights.”

The female majority working in private households is a trait underlined also by Fiona Mactaggart – Labour MP for Slough -, present at the Sunday celebration for the International Domestic Workers Day organized in London.

Returning to our sunny 17th of June, the reason why Justice 4 Domestic Workers, with One Billion Rising and guest speakers from the Unions, gathered in front of the Parliament was not only to celebrate together International Domestic Workers Day. But also to express once again the distress for lack of recognition due of so many Overseas Domestic Workers. 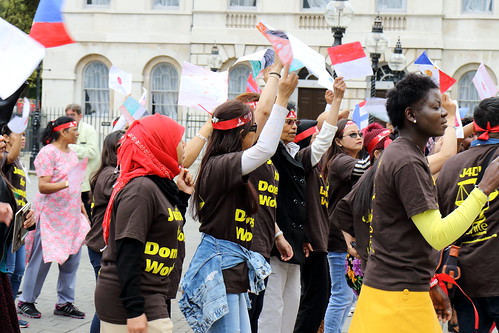 As mentioned, there is a visa process to undergo for the migrant to reach the UK as Domestic Workers. From April 2012, the Overseas workers who accompanied their employers in the UK, are not allowed to stay in the country for more than the fixed 6-months term visa, if they want to change employers. 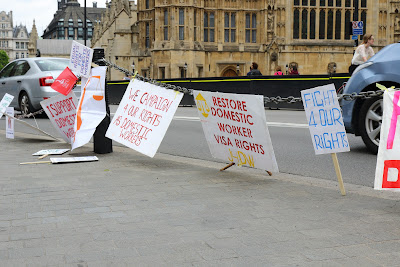 An exception can be made in case of abuse.
That means, when reported harassment, exploitation, or abuse by the employer, the worker can be granted at least 6 months of extended permit.

This would allow the proceeding of the investigation, in order to bring the wrongdoer to justice.

During this time, the victim could also work under a different employer. But, as said, we are talking about a victim, who should be recognized as such, which means that the abuse needs to be reported to a competent authority.

According to the NationalReferral Mechanism (NRM), once the circumstances would have been investigated, the person is recognized as a ‘victim’, in reference to article 53 of the Modern Slavery Act 2015.

What conclusions this legislative overview bring us to? As reported by James Ewins in his Independent Review of the Overseas Domestic Workers Visa (16 December 2015), domestic workers “often do not have knowledge of their legal rights” (29.5)

Exploited, they run away, seeking refuge, maybe entering into illegal groups, not reporting the abuse, or obliged to return to their country.

“It is generally recognised that the UK woke up to the phenomenon of domestic violence in the 1980s, yet even some 20 years later, Home Office statistics suggested that only 35% of such abuse was being reported, and some research put the figure as low as 23%" - the Independent Review reads.

Because of the many unreported cases, there are not enough data for the government to prove that the so called tied visa has given space for more abuses by the employers.

The day offered the chance to hear see some dancing, here music, and listen to some of the really difficult stories of these courageous women.

“Not only you are the fire ignition of One Billions Rising, but you really hold up the society in which you are working in the UK,” said Monique Wilson, Global Director of One Billion Rising

“We will be by your side – encouraged Diana Holland, Assistant General Secretary of Unitethe Union - beyond where we need to be, in front where we need to be, but most importantly we will be alongside, all of us together, linking arms in solidarity, protecting our democracy, and standing up for what is just and right.”

The way to go is long, but hope does not fail when others stand by your side and support the cause. 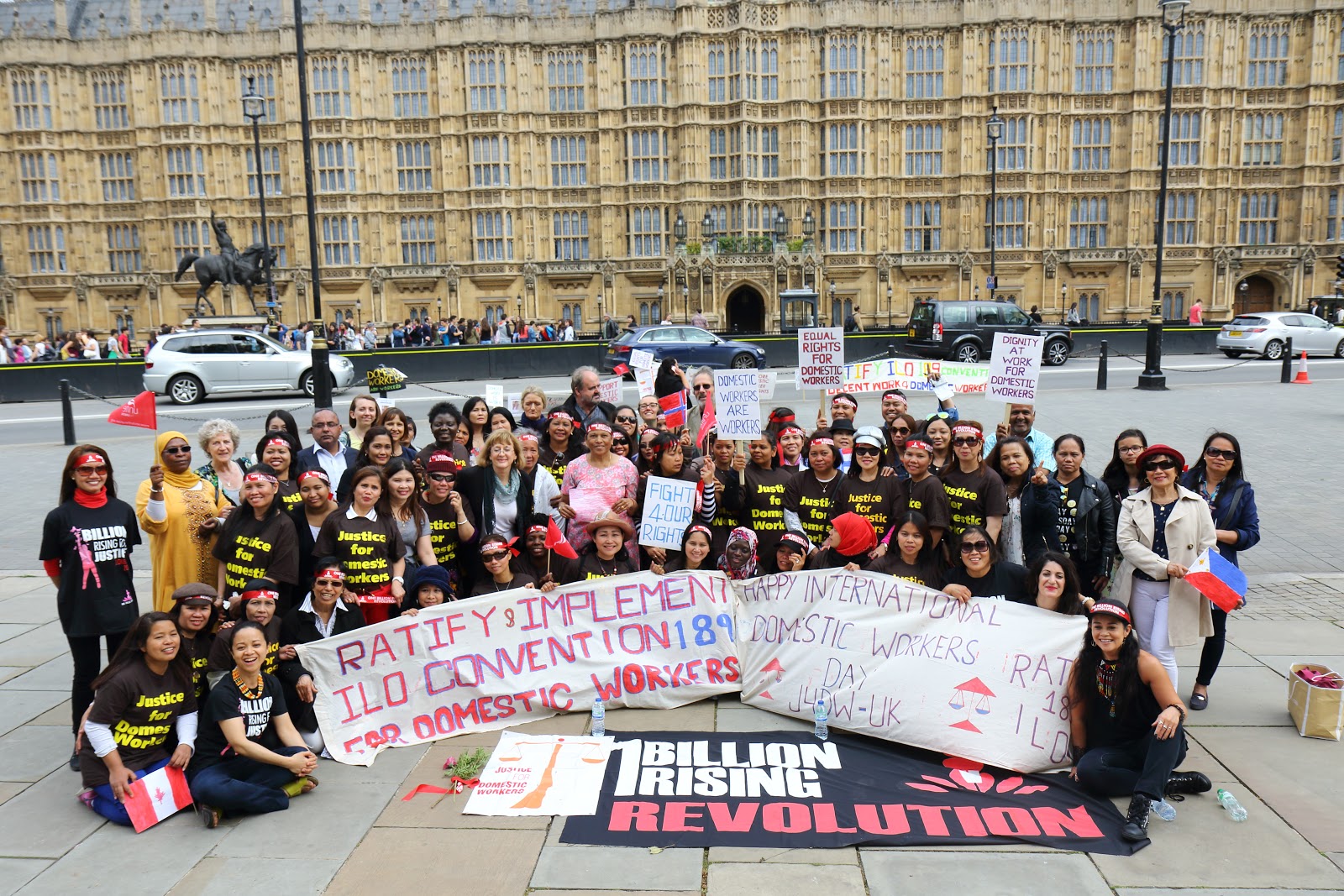