Poppies: poetry at the front 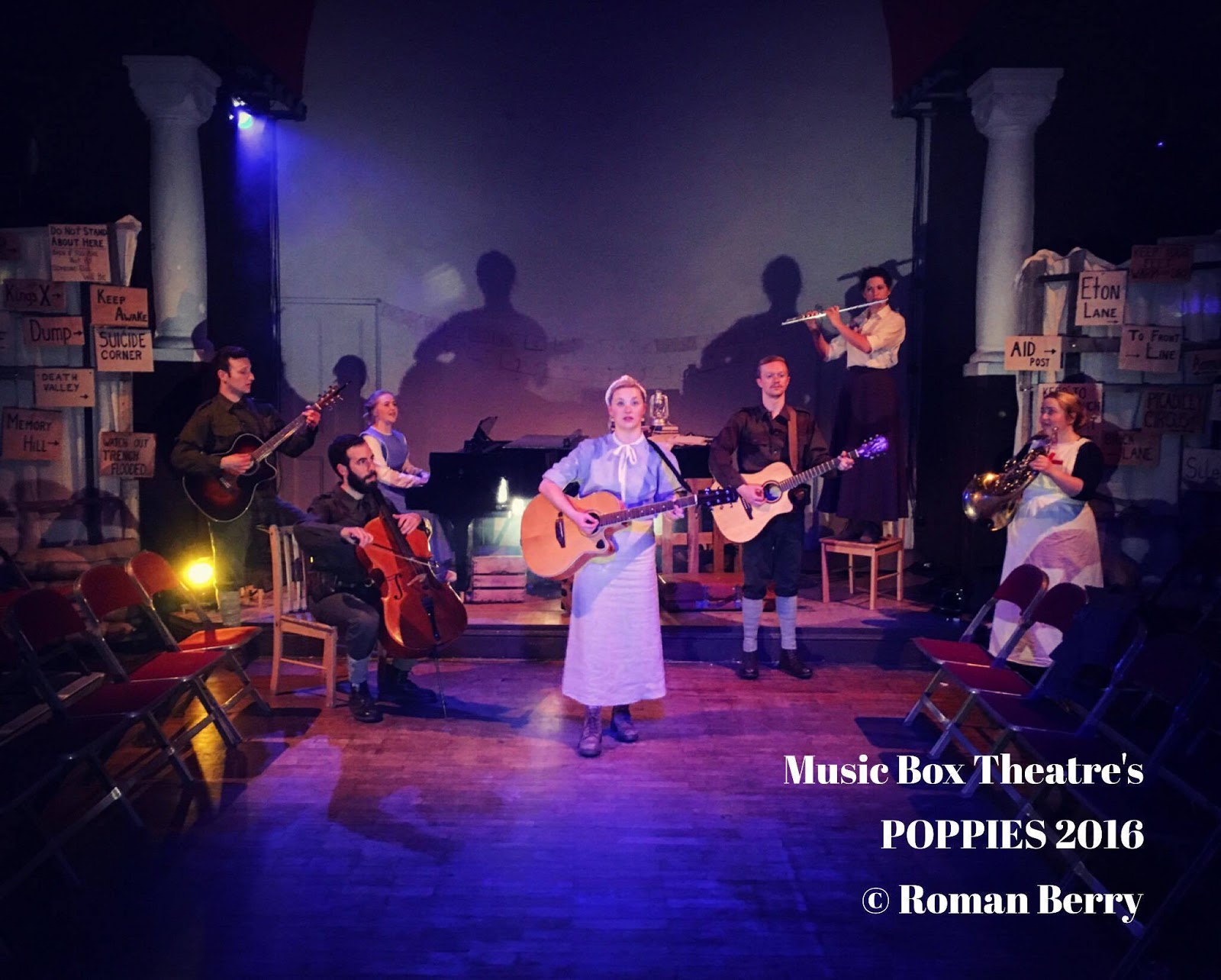 “War makes us beasts. They say so.”

What would be life without poetry, music, theatre? Culture is the spiritual nurture of souls.
Imagine, then, what would have meant fighting in the First World War – the most unexpected in terms of length and brutality –, where men were often deprived of their dignity.

Decent living conditions were already a luxury. Not even to mention any possible form of artistic entertainment.

There was not space for theatre, they said. But a woman brought the lyric of life back among the soldiers. Poppies captured that moment: beginning, initial challenges, and development of the work of Lena Ashwell – renamed May Kirklees in the play. 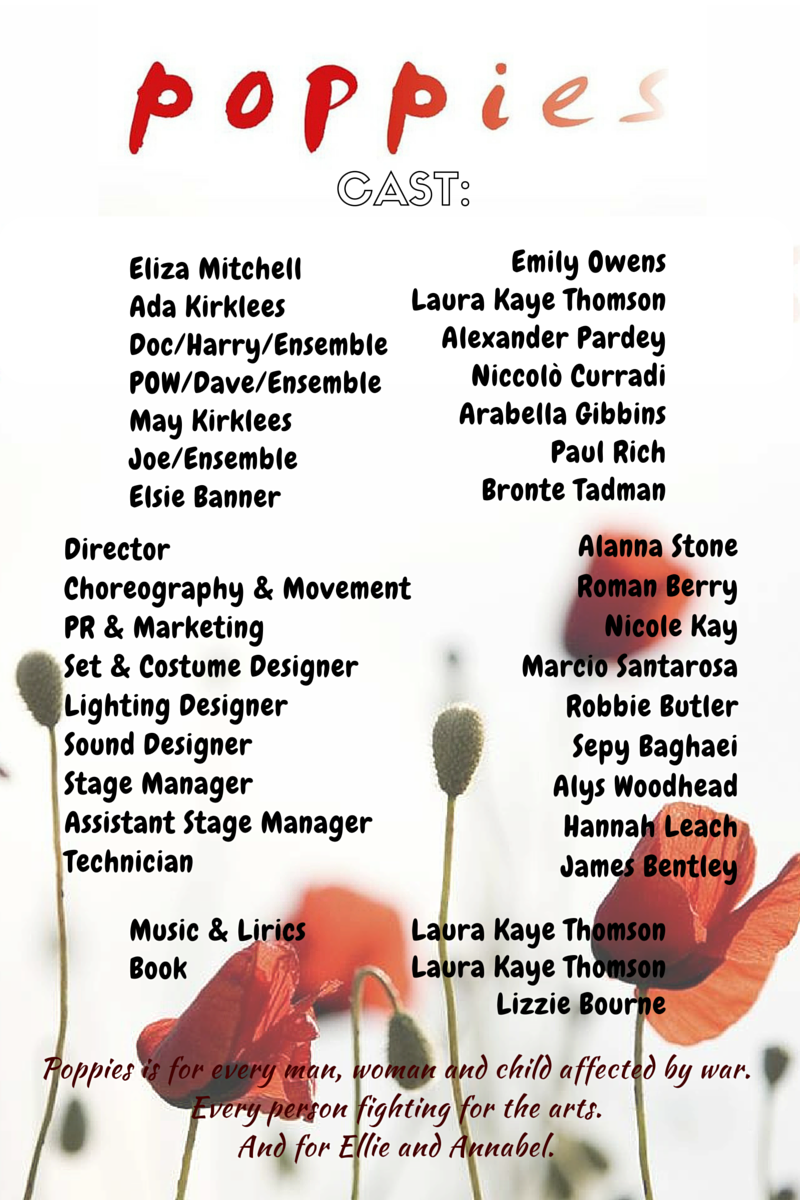 The original musical was at The Space from the 17th to the 28th May, brought to life by Music Box Theatre.

The story goes that Lena and Elsie meet by chance in a hospital and, together with Ada - Lena’s sister - left for the front, France, where the British soldiers are fighting surrounded by wounded comrades, mud, and the cold.

What is their intent? To bring back the lyric of life, the feelings, the human touch that comes from the arts. The War Office doesn’t approve such a visionary adventure at the beginning.

Thus, Lena decides to get the proofs and show the benefits of the programme by herself, with her sister’s support, and the freshly met Elsie.

The three women face the laughs and mockery of the soldiers. Step by step, by including the men in the performances, the ladies “in working men’s boots” – as they sing at the beginning of the second act – succeed in reviving the sensitive side of the troops.

But the soldiers are called to the front rows. The camp is an exchange centre, where men come and go, maybe rest, wounded arrive, prisoners are kept.

In particular, there is a German captive who, voiceless for months, becomes the witness of a miracle, acted by the women themselves.

Where real story and a vibrant cast meet

The well-established titles of the West End musicals make quite difficult nowadays for a new piece to live up with the public high expectations.

Nonetheless, Poppies succeeded in creating an empathic feeling between the audience and the story itself. And this, in theatre, is possible thanks to the performance, from the actors, to the stage’ arrangement, the sound, and the movements.

Firstly, the plot. The women faced one challenge after another, with sudden hopes raising from the smiles of the troops. The soldiers – at least, we saw 6 of them, interpreted by 3 men. If the uniform was the same, the actors managed easily to change their characters, becoming different people -  were forced to move away from the ordinary delights as an evening performance.

Even if weapons and deaths were far from the home country, the destructive power of the war affected people – every person. And it didn’t matter were only the men embracing the rifles. The nation was united, both on the front and on the back rows, men and women: suffering, and celebrating.

Secondly, the cast. They acted, sung, and played with a lot of energy, moved with a great coordination.

The Space offers a raised stage but also the possibility to extend the performing area in the centre of the theatre – which was in act for Poppies.

The actors moved back and forth between the main door and the raised stage, right and left, among the audience.

The play was everywhere around us, and by the coordinated and paced movements it became an immersing experience.

Thirdly, balance and pace. The most dramatic part was kept for the end, with my thanks for not having stressed it more than such a topic could have easily tempted to do.

The story reached its climax at that point. Words and the pace – with no excessive sorrowful lines – delivered the scene and the rapid development of the events, as real life make it.

is one of Elsie’s final line. 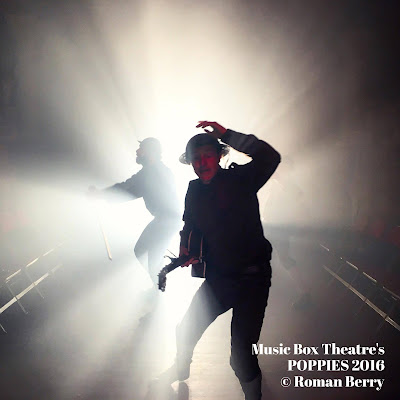 Yes, the soldiers are standing on opposite side at the front.

Yes, men are dying and the enemy is on the verge of winning more territory: theatre is not the first think the commander have to think of.

And yes, during war life is not as easy as singing a song.

But Poppies helpes us today to understand better the past. The real events – from where the book for the musical come from – are the reason for we can say extraordinary people live and act in difficult time for the humankind.

No, the soldiers, though different and standing on opposite fronts, wore the same clothing: a uniform. Aren’t we, indeed, all from the same race – humans – worth deep respect, regardless of the nationality?

No, poetry and plays are not the first thing to set in a camp. But, as time passes and the conditions of the men fighting becomes more miserable, they help to reconnect with their souls.

No, life is not as easy as a song. But music is special language, and it allow us to grasp the meaning and the bigger picture beyond our single daily challenges.