Playground: the difficult art of being a mother 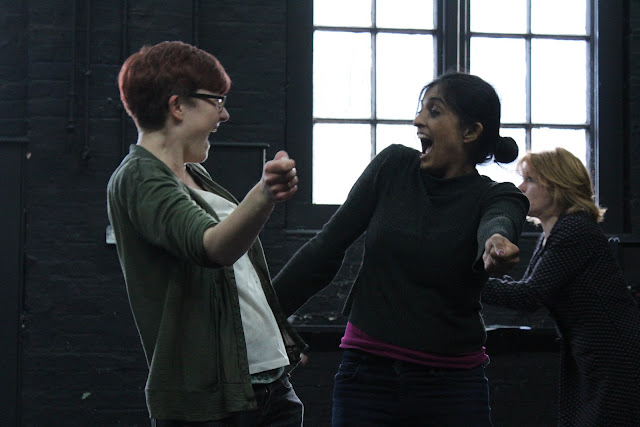 4 mothers and a seesaw

Not a child’s play when it comes to dealing with other adults, especially when they are female grown-ups, standing on the same (play)ground.

Negotiations and the contrasting (but evolving) relationships among 4 women are the protagonist of Playground, a play on stage at the London Theatre from the 28th April to the 1st May.

The children attend the same local primary school, therefore, the same playground. That’s the only common element shared by four mothers, the characters of the play written and produced by Karen Morash.

Amy is pregnant for the fourth time.

Bobbi is one of the patrons of the school, as she left her job as a lawyer to take care of her kids.

Coral juggles with 3 jobs to support her daughter, left alone by a not peaceful husband.

Elaine writes a blog on mothers’ life as she sees it, while liaising between the parents and the school. Oh, yes, and she also has two children, who are perfectly able to take care of themselves while she types on her tablet.

It is revealed that an unusual episode between Bobbi’s and Coral’s kids has happened. But the measures adopted to solve the situation are not fair in the eye of the second mother.

Fireworks are lighted up when there is not initial dialogue, and a single disruption creates a bigger earthquake in the relationship among the 4.

While Elaine tries a first approach one-to-one in order to calm down Coral, eventually the meeting between the two mothers directly affected by the incident, ends in a sort of fight, well, both verbal and physical.

But that’s not the end of the play. The situation evolves. The headmaster intervenes. Terry, the man who left Coral and his daughter alone, appears. And the noisy building operations in the nearby site are in progress.

I forgot to mention this earlier. Right close to the playground, there will be soon brand-new houses for the local community. In the meantime, be happy with the tall cranes and building materials scattered around the gates – always left open by the workers.

What I liked: real mothers and stage movements

The characters were easy to distinguish, but not stereotyped. The development of the story, with changes in the relations, and the nuances of more complex personalities, proved a closer approach to reality than fictional characters.

As the playwright previously told me (here you can find the interview with Karen Morash), the theatre piece puts in front of the audience the tangled negotiations the visitors of the playground are obliged to face daily.

The play is equally made of words and movements. The stage almost empty – if not for a blue, a yellow, a green, and a red boxes, that contain the few props used – is occupied by seesaws, slides, and screaming children thanks to the actresses’ movements.

Monologues and dialogues, however, are often too long. Where all the four characters are involved, the scene is kept short, and the pace is good. Whereas the rhythm slows down when it comes to the dialogue between two or in the few monologues (or the conversation mother-child).

Not to forget the special guests: 3 male toys as the workers in the building site. The complete absence of male figures is, indeed, either compensate with the women playing those roles – as in the case of the Headmaster and Terry – or toys moved by the same actresses.
We have, then, men interpreted by toys. And games and colourful objects there, where children are not allowed: on the construction site.

The playground, instead, becomes the place where social conflicts happen, and the mothers – the only real characters – try to find the solutions and to learn how to live together. 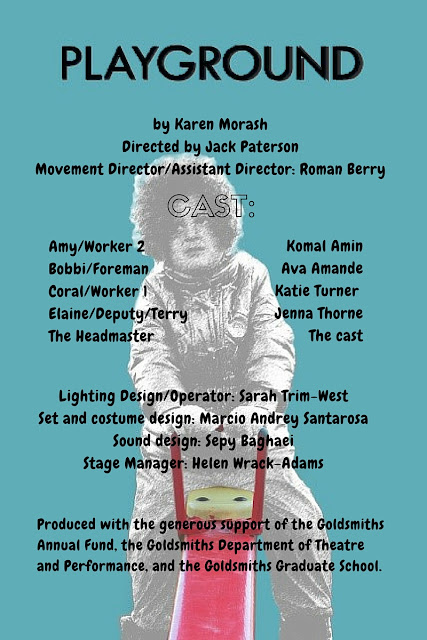