Automatic CCTVs buzz at the top of the back wall.
Our steps seem guided by the drum’s beats as we enter the half-dimmed performing space.
Some actors are already on the stage, black jacket and arms crossed behind their backs.

Illegals – The Game Show 2 starts.
Well, the audience has not yet taken their seats, a light on the back has still to be turned off, and the “no photographs” announcement to be made.
And the atmosphere already does not look like we are going to have a drink with a friend.

Kingdom Detention Centre hosts once again the night during which one out of three illegal migrants will win his/her pass to walk freely on the British soil.

The lights go down.
The presenter makes his appearance among singing and dancing of the actors already standing on the stage.

He wears a red and purple suit.
In a minute, the three contestants, in crumpled plain blue uniforms, are brought onto the stage by the controllers – the vigilant arms-crossed people we met at first.

As the presenter introduces the audience to the four segments and to the rules of the game, the sign “applause” makes his appearance now and then on the side.

This is a TV show, and the audience expects to be entertained.
The Divergent Theatre Company did not intend to confuse, though.
Confusion may be the predominant feeling in the audience, but not because of the show.

It is incredible how migrations stories had the headlines for the whole year.
We cannot stop thinking of the boats, the walls, the tragedies, the solidarity, the photos, the refugee camps. How many elements, Parliament debates, authorities’ comments.

I also prepared my MA Radio Final Project on the topic. But, as you may listen, it is already an old piece.
The story has definitely moved, as they say in media terms. And good pieces may be too old at this time.

Art, instead, can readapt.

17 - 21 November: Illegals – The Game Show was on stage at the Waterloo East Theatre (London).
In conjunction with the SEA ArtsFest 2015, the Divergent Theatre Collective proposes A Migrant’s Tale written by Roman Pedro Berry & Eleanor Sy Templeman.

After its first appearance in June, Illegals is back, along with the new wave of events over the migration debate in Europe.
What have we heard about so far? The number of people seeking asylum in the Western countries from the Middle East has risen till the point barriers, walls, Special Forces have been activated on the borders.

Britain has for many months stood on the position to tackle the migration wave by accepting few of the many applications for asylum, and definitely not in a quota determined by others EU member states.

Specifically, they are welcome those


“who shares our values, who can we accept”

But how to select those people? How to find out their eligibility?
Costumes and talent competitions are part of the process, two fundamental segments of the Show.

“Do you consider yourself an economic migrant?”
“What are your future plans in case you will be the winner?”
But also, “what is your favourite book?” were among the questions from the audience during the Q&As session of the performance.

No surprise: if humour is one column of the Illegals, we can say interactivity and engagement with the public are the second pillar to build the archway of the play.

The public is truly the judge at the end of the show. Even if we have to say the final turn could well be extended and not let it go rather hastily as it was.

For those who attended/ read my previous post/ heard about The Illegals (1), it will be easy to notice the differences, first of all the single presence of the Show Host, or the repeated appearance of the same actors in different roles.
But such smaller cast is easy to spot when compared with its predecessor.

If we have to judge on the performances, the current group is perfectly coordinated, a plus to consider when we have songs with alternate voices and sounds as in this case.

Another positive note goes to the use of the performing space, which went beyond the limits of the actual stage.
To this regard, percussions and musical director set their space aside, right in order not to disturb, but neither completely disappear: the music was live and part of the varied play. 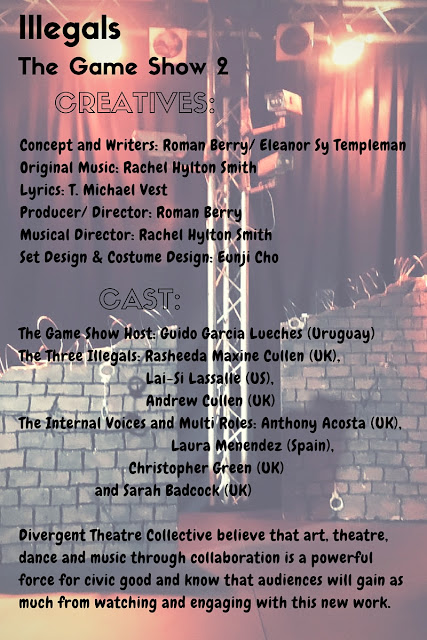 The Illegals – The Game Show (1) shed a light on the many possibilities theatre can play with, even – and I dare to say, more urgently when it comes to – social topics.

Migration is a subject that today is not only impossible to avoid in public debates, but also key to consider for our future as a globalized world.
Artists have only to choose their best approach for it. It can be serious, analytical, or humorous. But none of them prevents the play to be a thoughtful piece at the same time.

And the hope, as the director Roman Berry told me, is once again to tell a story, to go deep into a problem, and question ourselves.

And this comes not only by asking “what I can do?”, but also “what is our identity?” as a country,
as Europe,
and simply as people.