Peace Picket and the quiet fight

In a bright, windy day in London, I walk in Parliament Square, from Westminster Cathedral, towards the Underground station.
While I stride under the row of flags which limit a side of the green in the square, I notice two boards. Their shapes stand right in front of the House of Parliament gates.

A man, reading a book, is sitting between the two of them.

“Peace Picket,” “Peace for Syria” are the words written on the panels. There are also some pictures attached and a small colourful flag.

Peace Picket started on the 19th April this year.
A sharable platform, the initiative tries to unite people under the common interest of fighting for Human Rights.
Campaigners, peace groups, and supporters of social causes, can ask for the use of the space.

The boards are always looked by a person, never left alone.
The picket represents a constant sign for the Members of the Parliament, as well as for the many tourists who cross the square at the core of the city.
“They cannot forget about it: it is a constant reminder” Dan, the first guy I meet, tells me on the reasons for the platform. 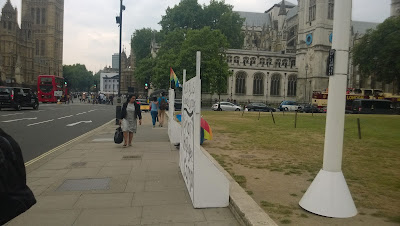 On Friday the 12th, just the day after the first encounter with the all-around-the-clock peaceful protest, I wander again in front of the Parliament. This time, the drizzle of a so common London day makes the sky quite dark, even if it is an early afternoon in June.

Another man is sitting on the pavement, holding a colourful umbrella, and looking at the House of Parliament’s gates.


Listen to the contributions by the two picketers: their motivations, what the boards are standing for, and the current cause.


Other causes have already found their place on the sharable platform in these months. Both the men I met mentioned the vigil and the campaign for the prisoners in Guantanamo Bay Detention Camp. And other will come.

During these days, the picket stands for the Syrian asylum seekers.
“We want the government to offer them a safe passage in the UK, and resettlement,” explains me Dan.

The movement echoes the principle of nonviolence. Far from the marches across the British capital, the people standing close to the white and quiet boards believe in a less loud action, but even more efficient.

“I cannot try to speak of peace and justice issues,” tells me Russ McPherson, the second guard of the Picket. His personal attachment to the currently displayed cause is due to a personal experience with refugees and Syrians forced to escape.

Both the times I left the picket, the sky is still the same and the same crowd drift in front of the Parliament. The white boards, though, attract the eyes of some.