London & China: not only cultural interest 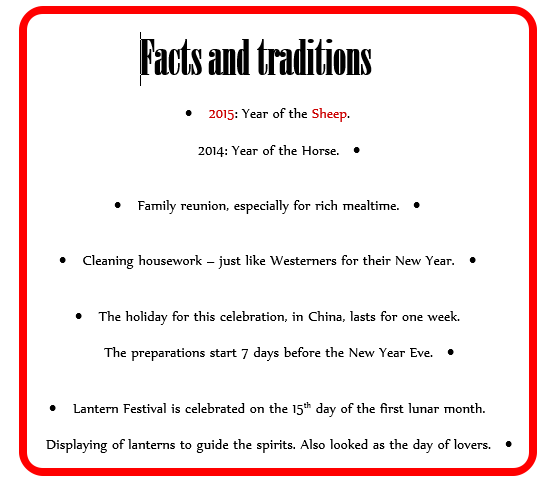 Londoners will join the Chinese community with great celebrations for the Chinese New Year, on the 19th of February. The feast in the British capital is known as the biggest outside Asia for this occasion.
Chinese New Year, also called Spring Festival, is the most important celebration for the Asian country. Fireworks, parade, and stage shows, along with many other opportunities over the city, will welcome the new start.

“If you walk in a street of London, you will very easily find a lot of Asian faces, among them, I believe, many Chinese faces,” said Mr Miao Deyu, Counsellor of the Press and Public Relations section at the Chinese Embassy.


According to the 2011 Census in the UK, the Chinese community counts more than one hundred and twenty thousand people only in London. It is also the second minority group present in the City of London.
The Statistics Quarterly Report, released in November 2013 by the Office for National Statistics, brought another interesting estimation. 40.000 Chinese people – that is 8.7% of the whole amount of immigrants – moved in the UK. Just after them, there are India (with 37.000 people), and Poland (29.000).  For the first time, the Indian country is not at the top of UK immigration

London is fond of China

Chinatown is a famous area that recreates, as the name said, a little piece of China in London.
“The important thing with the incoming tourists is they do not only come here to see the historical and cultural relics, to enjoy the beautiful sceneries and natural landscapes,” Mr Miao said.
“They also bring Chinese culture as well. It is a two-ways communication: when they come to the country, they talk to the people, they visit the top attractions of the UK, and also they contribute quite sensitively to the economic recovery in this country – because they buy here, and I think not many people more than Chinese tourists would like to spend in Harrods or in other big shops. But also, on the other way round, I think that the number of UK tourists visiting China is also increasing.”

Nevertheless, the relationship with this culture has gone far beyond. 2015 has been greeted as the year of Cultural Exchange between China and UK.

The first half part will see the British culture season in China, with the theme Next Generation: the core will be digital media.
The second part, instead, will see the inverse.

Interview with Mr Miao Deyu, Head of Press and Public Affairs Office at the Chinese Embassy in London