Two girls in front of me came from Edinburgh, where they study, just for this night.
Another couple of friends, as far as I can hear from a dialogue with a viewer, came from Brazil.
Many other people were with them and with me on the 31st of December to watch the New Year's Eve Fireworks which are traditionally lit on the South Bank, London.

After the great attendance experienced last year, with the presence of over 500.000 people, the Mayor of London, Boris Johnson, decided to make the visitors pay the show.
For the first time since the beginning in 2004, the fireworks were not a free entertainment for the welcoming night of the New Year.

£ 10 was the price of the ticket, money which would balance the expenses for the night – staff, first aid, cleaning teams.
Even if at the beginning there were some claims for the cost, See Tickets – the ticketing service company employed – announced the sold out earlier than expected.

Once reached the gates, the staff checked randomly the bags and matching identity between the buyer and the actual visitor. Indeed, every ticket was personal and barcoded.
Some groups were split by the crowd, and far away from the buyer. As a result, when people were allowed to enter, there was a bit of confusion to gather all the members and let them in all together.

Some people bought the ticket from someone no longer able to go. In the unfortunate event that they were found not matching with the name printed on the paper, once asked a document for identification, they were left outside the viewing areas as the real buyer was not present.

The aim for this year was mainly making the event safe and enjoyable for the 100.000 people – this was the peak capacity considered - allowed to see it.

The fireworks were broadcast worldwide, as usual, on BBC One.

London Fireworks 2015 as broadcast by BBC One

The celebrations to welcome the New Year did not end here.
In addition to the restaurants, stores, and museum open for the day, on the 1st of January, the London New Year's DayParade was on the agenda of the city.

The show was performed for the first time in 1987, and its participants as well as its audience increased during the years.

For this 2015, twenty countries came from many parts of the world to take part of it.
The parade, which went on for 2.2 miles, started at twelve o’clock on Piccadilly Circus and ended in the early afternoon in Parliament Square.

As it happened for the previous night, the viewers were from far different parts of the world.
Indeed, among the many people who carried luggage on and off the train in the underground stations to catch the flight back home, as many stopped a few more days in the British Capital City. 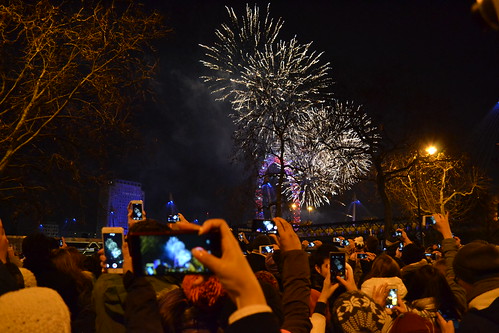 According to data published by the Office for National Statistics last year, 16.8 million of overseas visitorsvisited London in 2013.
This figure represents more than half of the total number of visitors in the United Kingdom, a percentage that increased overthe last ten years, from 47.3% of 2003 to the current 51.2%.

Holidays are a good time to enjoy travelling abroad, in order to change the surroundings - hoping it will be a good wish for a different and happier year.

London, one of the most multicultural city in Europe, welcomes its visitors with a particular glamour that attracts so many people especially for the New Year’s events.