We wish you a merry Christmas e-shopping

Christmas is approaching and, as the stores put their remaining Halloween treats at discounted prices, stallholders and retailers prepares their spaces in markets and fairs especially organised for this period.

Piazza Navona, in Rome, is covered by stands which attract young and old people, with candies, puppets, and gift ideas.
Similarly, in London, it is usual to walk throughstreets filled by the smell of hot sweets, Christmas decorations, and softtoys.

The winter season seems a good time for the retailers, who may adjust their bills.
People need to buy food for the feast meals, gifts for their children and friends, lights and characters for the nativity scenes to set in their homes.
However, the way by which make all this shopping has changed during the years.

In the release Retail Sales, December 2013 - published on the 17th January 2014 by the Office for National Statistics – there are some interesting figures related to the last Christmas shopping.

The amount spent in the retail industry grew by 6.1% during December 2013, in comparison with the same month, one year before.
Even the Internet sales showed an increase of 11.8% matched with the deals made in 2012.
The surge is also visible when comparing the percentages related to the shopping online of November and December: during the last month of the year, the sales rose by 1.8%. 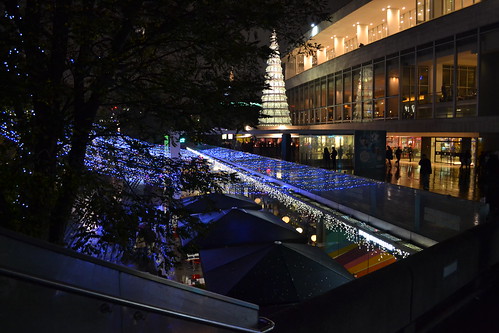 
Mintel - the market research firm based in London -, in a press release published during August 2014, predicted a rise in the online sales also for this Christmas.
The growth for the 25th December deals, in general, is estimated this time will be of 3%.

However, the shopping bags will include mainly products not edible.
On Mintel’s website, a pie chart clearly explain the split situation of the market predicted for this year. The firm forecasts that 59% of all the customers will head towards non-food retailers during the Christmas season.

Moreover, as Mintel’s Director of Retail, Richard Perks, said – according to the article published on their own website - “as in-store sales growth will be weak, internet transactions will be surging”.
Approximately 13% of all the deals estimated will occur via Internet connection.

Last year, the people lived the holidays with the restrictions of the economic crisis which spread across the developed countries. The families started to cut many expenditures and the gifts handmade became again fashion items.

The limits of customers’ budgets made the buyers wiser.
The offers online and the now fast delivery –sometimes even free service, with minimal total expenditures – attract the shoppers, moving them away from the crowded streets and the festively decorated stores.

The sparkling and colourful Christmas markets, though, remain an inviting destination not to miss. They are a chance to enjoy even more the atmosphere, sometimes also for small pockets.