Jacksonville Jaguars hosted Dallas Cowboys on the pitch of the Wembley Stadium in London.


But the match atmosphere was also over the building, all in the nearby streets, where you could breathe a bit of America.

“Tickets, tickets on sale” some men shouted at the end of the stairs which lead the huge crowd from turnstiles of the Wembley Park station to the towering and glittering Stadium.
They wore heavy coats and black hats, like smugglers in dark streets.

The symbols of the teams filled the walls at the sides of the avenues and they covered the visible parts of the overpass on the Olympic Way.
In this case, there were a jaguar and a star, but for the other teams the animals remain the preferred elements.

In addition to them, quite a lot of people stopped near the cardboards set to take a picture with some players, shot during the game. 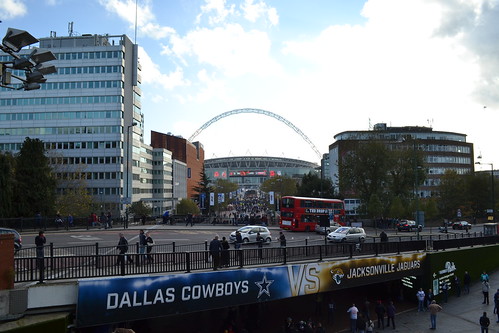 London is probably one of the most multicultural city in Europe.
Nevertheless, it could be an unexpected experience for a resident to meet such a cheering crowd, made of dogged supporters on their own as well as whole families – with children and wives following the man at head.


The fans here may find their own habitat, as well as every person sport-addicted. It seemed an environment not only American-friendly or fanatic-supporter-friendly, but it invited everyone to join and enjoy the Sunday time as it is in a different part of the world.

This was the third match in the NFL International Series games, in 2014.

Jacksonville Jaguars and Dallas Cowboys played at 18:00 this afternoon.
The year for the American Football followers started on the 28th of September, with Miami Dolphins at Oakland Raiders.
The second match was played on the 26th of October, when Atlanta Falcons hosted Detroit Lions.

Along with the European football, the Wembley Stadium turns from time to time into a welcoming space for other sport.
The whole neighbourhood doesn’t miss the chance to celebrate the moment and to offer the best enjoyable experience outside the building and even much earlier than the time for the play.

The United States, in the end, are not so far.